Scouting is alive and well in East Kilbride with the 1st East Kilbride Scout Group opening a third Beaver Scout Colony as part of their centenary year celebrations and plans for a second Scout Troop are now well advanced as well.

How do you celebrate your 100th birthday? If you're a Scout Group, then you look at what most young people join your movement for and decide to hold an activity based weekend camp!

Many months in the planning and with some trepidation, last weekend the Group achieved another first when they took most of their 180 members to Auchengillan Outdoor Centre.

Two coaches took Cubs and Scouts up to Auchengillan on Friday. The 'Beaver bus' set off on Saturday morning. Beavers and younger Cubs were in dorms, Beavers for a one night 'sleepover', while Scouts and older Cubs slept under canvas. The cost of this event was heavily subsidised from 'bag-packing' efforts and a grant of £350 from South Lanarkshire Community Fund. 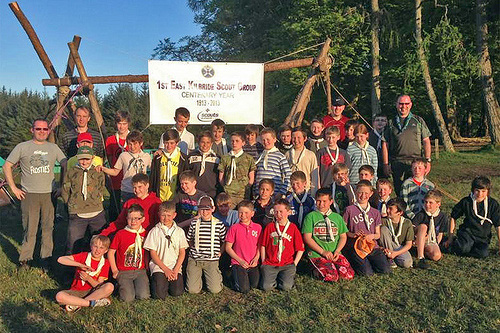 A wide range of activities took place over the weekend from hiking to hill walking, grass sledging to climbing. Everyone came together for a campfire on Saturday evening, where painted jars with night-lites were used at the end of the evening to great effect, after the celebratory birthday cake was cut.

The camp closed late Sunday afternoon with lots of tired young people and exhausted leaders heading home. A fantastic weekend, great weather, memories that will last a lifetime, an experience which should inspire the next generation of leaders and helpers as we seek to carry forward into our next century what the local founders of the Group started all these years ago.

Twenty four of the Group's Leaders took part, supported by parents and four leaders from the 3rd East Kilbride, one of whom Alan Reddick, (Assistant District Commissioner Cubs), led the campfire and we were delighted to be joined by Douglas, our Depute District Commissioner during the weekend. Without these adults and young leaders willingly giving their time, this event would not have been possible.

To read more about the Group's history, click here.

Could you be the next District Commissioner for Clydesdale District?
17th January 2020

Consultation on membership of the Regional Scout Council
15th January 2020